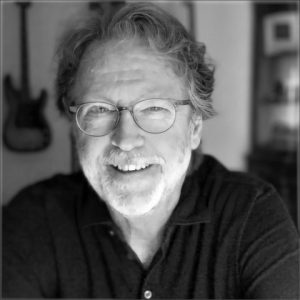 Brief background info:
Rick Bacus is a multi-instrumentalist / vocalist and has been actively involved with music for many years. With extensive experience as a performer and session musician. Rick has worked with students of all ages, mentoring and teaching guitar, bass guitar, ukulele as well as  working with various beginning rock bands to help them explore what it might take to be a musician, learn more about the tools they use to make music and how to successfully work with others in this business.
Education:
Rick is a graduate of Baker University where he earned a Bachelor of Music Education degree.
Awards
Rick Bacus is a two time inductee into the Kansas Music Hall of Fame
2012 – Columbia Records / CBS recording artists “Morningstar”   2 albums
2017 – As the bassist for local KC trio “Stone Wall”
Rick teaches on Wednesdays and Thursdays.
Rick teaches: Bass Guitar, Clarinet/Saxophone, Guitar.

Stanley was born in 1950 in Ottawa, Kansas where he joined his first band, The Lost Souls. His first recorded work with Peter Frampton was the wildly successful live album Frampton Comes Alive in 1976. Sheldon also played on subsequent Frampton albums, I’m in You and Where I Should Be. In 2007, he contributed as co-writer and bass player on Frampton’s Grammy winning instrumental album Fingerprints. He was part of Frampton’s touring band on the 2011 UK leg of Frampton’s Thank You Mr. Churchill tour, Frampton’s hugely successful world tour in 2011-2012 celebrating the 35th Anniversary of Frampton Comes Alive and Frampton’s Guitar Circus tour in 2013.

Sheldon has a passion for teaching and, when not touring, he is offering bass lessons for students of all ages at Blues to Bach Music Center in Shawnee, Kansas.